People often ask us – why we don’t have in our collection creams for the face and body? What do the enigmatic words “body butter” on boxes with our products mean? What is the best choice, cream or body butter and what is the difference?
In this article we will briefly tell you about this interesting and very nutritious "dessert" for the skin called “body butter”.

The cosmetic industry is not at the stop. During the last few years in cosmetic shops dozens of bright packages with hitherto-unknown names on the labels have appeared. One of the pleasant discoveries in the field of cosmetology has become a product called "body butter" or simply "butter." This word implies a semi-solid oily substance that reacts to changes in the ambient temperature.

A great example is dairy butter: it is a solid in the fridge, softens at room temperature and melts on the palm.

Cosmetic butters use to act in the similar way. Any butter is an emulsion. Dictionaries inform us that the emulsion is a dispersed system, i.e. the liquid in which are suspended microscopic droplets of other liquids. Emulsions can be formed by any immiscible liquids, in physics, they are called phases. In most cases, the emulsions present in two phases, oil and water. It seems to be complicated? Not at all! The most obvious example of the natural emulsion is cow’s milk, wherein butterfat droplets are dispersed in an aqueous medium.

However, if you try to prepare an emulsion yourself, only one water and oil will be not enough. Take clean water and any oily liquid, such as coconut oil, and stir it well: you will not get it "suspended". Another component is nessesary: emulsifier. Emulsifiers is a special matter which possess properties to reduce the surface tension at the outer edge of all liquids, phase components, thereby holding them together and allowing to mix substances.

Thus, milk, dairy butter and cosmetic cream are emulsion examples. The difference between them is determined by the composition and the ratio of liquid phases, amount and chemical nature of the emulsifier, emulsifying method. Modern industry offers a wide range of different emulsions. Let's look at this question in details by the example of today's "hero", cosmetic body butter.

Consistency and "lightness" of any cosmetic emulsion depend primarily on the oil and water proportion in the composition. Since we have two liquids, one of them forms the outer, or dispersion, base, and the other thus becomes a dispersion medium and goes inside. Along these lines, this can be divided into direct and inverted or oil-in-water and water-in-oil emulsion. Oil-in-water is the suspension of oil droplets spread in water. In this case, the main volume is water in which tiny particles are stabilized by a layer of oil emulsifier. And on the contrary is water-in-oil emulsion. 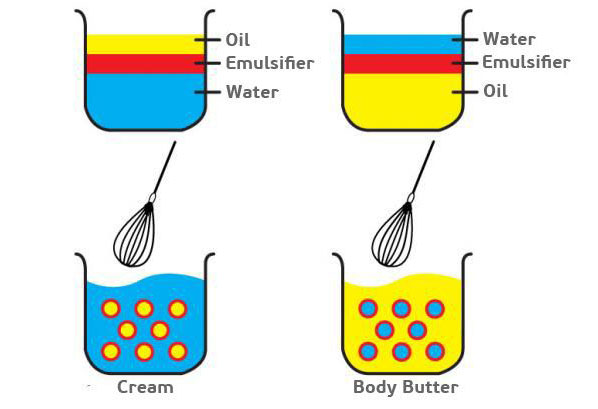 Water-in-oil body butters have a number of advantages. First, the formula allows producer do not use preservatives, and it makes all-natural composition. As we remember, in inverted emulsions each water drop is surrounded by the oil. Thus, lipids "seal" is the water without allowing it to come into contact with the air. This eliminates the possibility of the emergence and growth of bacteria. And if there is no bacteria, why make stuff chemical? In addition, during the application of body butters, dispersed water is released and absorbed into the epidermis and the lipid component remains on the skin like a thin film, nourishing the skin and soften it, while drawing moisture in and not letting it evaporate.

Second, to get really good product in compliance with all processes, manufacturer should use low hardness water, enriched with herbal decoctions and hydrolates.

Thirdly, in water-in-oil emulsions natural phospholipids, such as beeswax, lanolin and lecithin are used.

For the oil phase in the delicacies from by-cosmetics we use beeswax, and for water phase - agar. They act as co-emulsifiers, complementing and reinforcing each other's properties.
Among the active ingredients - aloe, cocoa, cinnamon, clove, lemongrass, orange oil, magnolia, ylang-ylang and many other magical gifts of nature.

Examples of oil-in-water emulsion - creams, lotions, facial and body milk. It usually has a lighter texture, absorbs quickly and leaves no greasy. Due to the high content of water it has cooling effect, but for long-term use, especially for dry skin, this type of emulsion is not recommended. The water being in excess in composition, not only quickly evaporate from the skin surface, but also pulls the moisture out of the deeper layers, which provokes dehydration at all levels of cellular structures. As a result – one-time instant moisture effect, and then the skin dries even harder.

In addition, the aqueous medium means a risk of bacterial growth, so the manufacturers have to include in the product formula aggressive synthetic preservatives.

So the answer for the question - what is better to choose, cream or butter - is up to you, dear readers. Just think about the "food" for your skin. The habitat of modern humans is already full of chemicals and artificial products, so read carefully the composition of any of the products that you purchase for yourself and for your beloved ones - from every-day food to cosmetics and personal hygiene items.